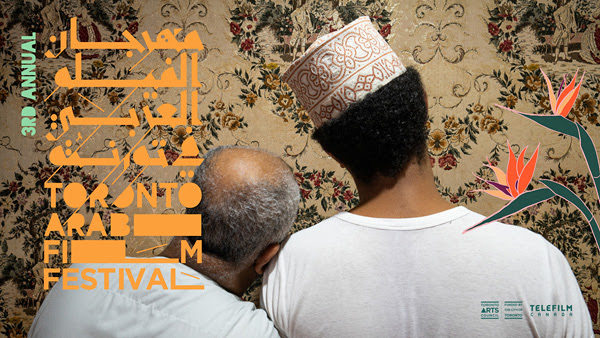 The Toronto Arab Film Festival (TAF) is returning this year for the 3rd annual edition, in a hybrid format, hosting in-person and virtual screenings, panels and professional development events.

While the Festival was born during the Pandemic, we are eager to welcome audiences back into theatres with 7 screenings taking place at Paradise Theatre and Innis Town Hall, from May 26 – 29. In addition, we are hosting 18 virtual screenings, a selection of which is available globally.

This year’s festival includes a programme featuring multi-generational Canadian and international Arab filmmakers, highlighting strong female presence both in front and behind the camera. Over 50+ films, hailing from 19 countries, offering a plethora of nuanced and unique voices, as well as distinctive visual storytelling. Films from Europe, North America and over 10 Arab countries will be screened reflecting an authentic image of the diversity of Arabs around the world that has been misrepresented for far too long through redundant narratives that lack nuance and consideration.

A significant number of films this year come from countries that have been facing daily turmoil and conflict. One of TAF’s panels this year, will bring together a number of Lebanese filmmakers featured in the Festival, including multiple award-winning filmmaker Mounia Akl, to discuss creativity and filmmaking amid political and economic collapse. The live panel takes place on Friday May 27 virtually and is free for anyone to attend anywhere in the world.

Single tickets and passes are now available for purchase, ranging from $10 for a single early-bird ticket to $65 for a full festival access pass.

One of TAF’s primary mandates is to platform the emerging wave of Arab-Canadian filmmakers. This year, in addition to screening 10 Canadian films, we’re bringing a number of them together for a roundtable discussion on Sunday May 29 at the Paradise Theatre.

Our opening night feature is Mounia Akl’s Costa Brava Lebanon, the winner of TIFF’s 2021 NETPAC Award. The film is a confident debut from Akl, that follows the free-spirited Badri family, who try to escape the political and environmental toxicity of Beirut by escaping to the mountains only to find their idyllic life shattered.

On Saturday, May 28, we are pleased to present a one day intensive Producer Accelerator, which was conceived to address the significant death of producers and a lack of Arab-Canadian producers in general in Canada. The goal of the accelerator is for teams of filmmakers and producers to come out of it together ready to take on their first project or scale up towards their next project.

We would like to thank our funders for their generosity in supporting this year’s Festival:

Toronto Arab Film (TAF) is a non-for profit organization dedicated to bringing films from, and about the Arab world, to Toronto audiences. TAF began because of a need to fill a void that exists in film programming in Toronto, specifically a lack of films from the Arab regions and a desire to reinstate a tradition of going out of watch films that has been lost.

Through our first initiative, Layali El Cinema, we programme year-round film screenings in Toronto. Through Mahrajan, our annual festival, we showcase Arab films from around the world. We also recognize the need to encourage interconnectedness between Arab filmmakers in Toronto and foster filmmakers, which we endeavour to do through the Shabaka initiative, where we support emerging talents through hosting networking events and running filmmaking workshops throughout the year.